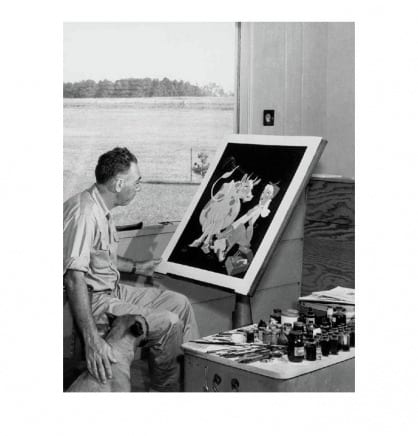 If you’ve ever attended the Come-See-Me Festival, you’ve probably noticed that frogs are a common theme at many of our events. That’s all because of our mascots, Glen and Glenda. But you may not realize the connection between these characters and one of the country’s most well-known illustrators, Vernon Grant.

Who Was Vernon Grant?

Even if you don’t recognize his name, we can promise you’ve seen his work. During the first half of the 20th century, illustrations were extremely popular. They were used in advertisements and to sell magazines. Vernon Grant was one of the most prominent illustrators of this time. He created ads for numerous products and drew covers and interior art for seventeen different publications. He’s perhaps best-known for three characters he created for Kellogg’s Rice Krispies®: Their names are Snap, Crackle, and Pop®.

Grant believed that Come-See-Me needed a mascot to capture the spirit of Rock Hill’s new spring festival. He created Glen the Frog for the very first festival in 1964. Glen was embraced by the people of Rock Hill and has since become one of the city’s most beloved symbols.

The history of Come-See-Me is just one part of what makes this festival so special. We hope you’ll join us for the 2017 festival to be held April 20-29.